Respect: Where Personhood and Production Meet 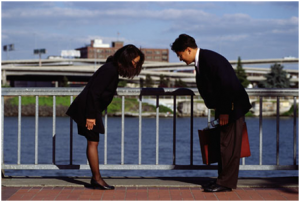 To show value and regard toward others

What goes around comes around; we all know that. But where I have seen this happen most dramatically is where it comes to respect. It’s a simple fact: Respect breeds respect. If you show respect for someone, they will most often show respect back. This is one of the reasons respect is such a powerful value for us to cultivate in our workplace, especially as it pertains to us as leaders. The attitude of bureaucratic leaders in the marketplace today is that they will show respect for their employees only if they feel their employees are respecting them. This makes sense to them, since they hold the highest authority and are responsible for setting the company’s direction. “If they would just follow my directions, this company could really go places!” they think to themselves, but what they don’t realize is that they are, in fact, the constraint that keeps respect from flowing toward achievement of vision. It is true that it’s easier to respect others when they have shown respect to us, but that works both ways. We are easier to respect once we have demonstrated respect toward others. Albert Einstein said, “I speak to everyone in the same way, whether he is the garbage man or the president of the university.”[i] What makes us great leaders is that we show respect first. Do not be a leader because of your authority alone; instead be a leader by your action and example. If we are to do this, we need to ask what respect is and how we recognize it. Respect is essentially the recognition of value, which means that it can be demonstrated in two significant ways. First, we can respect someone for their inherent worth according to their core identity, considered completely apart from what they do. We see from Einstein’s words that he clearly recognized that each person has the same value regardless of their role in life, and he did this despite his extensive list of lauded accomplishments. Dr. Seuss also expressed this well in his children’s book, Horton Hears a Who!, saying, “A person’s a person, no matter how small.”[ii] In the marketplace, we miss the mark if we assign respect based only upon status, intellect, achievement, or contribution. These are worthy performance standards, and they are worthy of respect, but they are not the gateway for respect. The reason this is so important is that when we grant respect only based on what people do without consideration for the inherent worth of people then we create an environment that celebrates performance, but undervalues people. This kind of environment chokes the lifeblood out of compassion, empathy, and care for people. It destroys authenticity and trust. If we are to create and keep the kind of leaders who establish long-term organizational success, we need to prioritize value correctly—celebrating inner worth (who a person is) before we celebrate achievement (what a person does). Once we establish that all people inherently have value, the next level of respect is valuing what people do. Now, having said so much about the importance of developing a foundation of respect for the worth of each individual in our organizations, I am in no way minimizing the importance of performance and achievement. Authenticity and trust are foundational, but they are not enough by themselves. To be successful, people and organizations must energize and maximize the skills, talents, and abilities of every person on the team. This is the organization’s power and its people’s sense of fulfillment. Everyone gains when we optimize and respect what people contribute. Building high-performance teams is about respecting people for who they are (BE) and what they contribute (DO). When we respect people at the BE level, we build trust. When we respect at the DO level, we leverage the strengths of each contributor, which means that everyone thrives! Leaders are respected by their followers when the leader first respects the reality that their followers are worthy people with intrinsic value as real people. People follow us because we care about them as unique individuals. There is incredible power in a leader who recognizes the inherent value in his followers and treats them accordingly. Leaders are also respected when they value the good ideas and amazing competencies of followers. Soon, the followers begin to treat one another with the same respect that they have been shown. The workplace develops a culture where people appreciate what their coworkers contribute to the common goals and, because they feel wanted, needed, and appreciated, they like coming to work and work hard while they are there. Respect also brings out the best in your employees because it recognizes what they contribute—and not just their history of contribution, but their future potential contributions. Soon, productivity increases and reputation grows. This reputation influences the client base positively and opens more doors of influence in other sectors. When all this happens, business is as business should be—thriving and enjoyable at the level of individual employees, and growing and profitable at the large-scale bottom line. This is the best of both worlds—personhood and production—and a key to it all is respect.
[i] http://www.goodreads.com/quotes/tag/respect?auto_login_attempted=true
[ii]http://www.goodreads.com/author/quotes/61105.Dr_Seuss